The following is from an article published by Canadian Stamp News on 23 September 2019:

Rounding out the first quarter of 2020 is another continuation, this of the “Flowers” series, with a set of stamps featuring dahlias.

“This is a bright, punchy spring issue,” said Gilson, who added these stamps will be released on March 2.

Found mostly in Mexico, where it has been that country’s national flower since 1963, as well as Central America, dahlias are also grown in gardens around the world.

This year – 2019 – was named “the year of the dahlia” for bulb crops by the U.S.-based National Garden Bureau, the self-described “marketing arm of the gardening industry.” 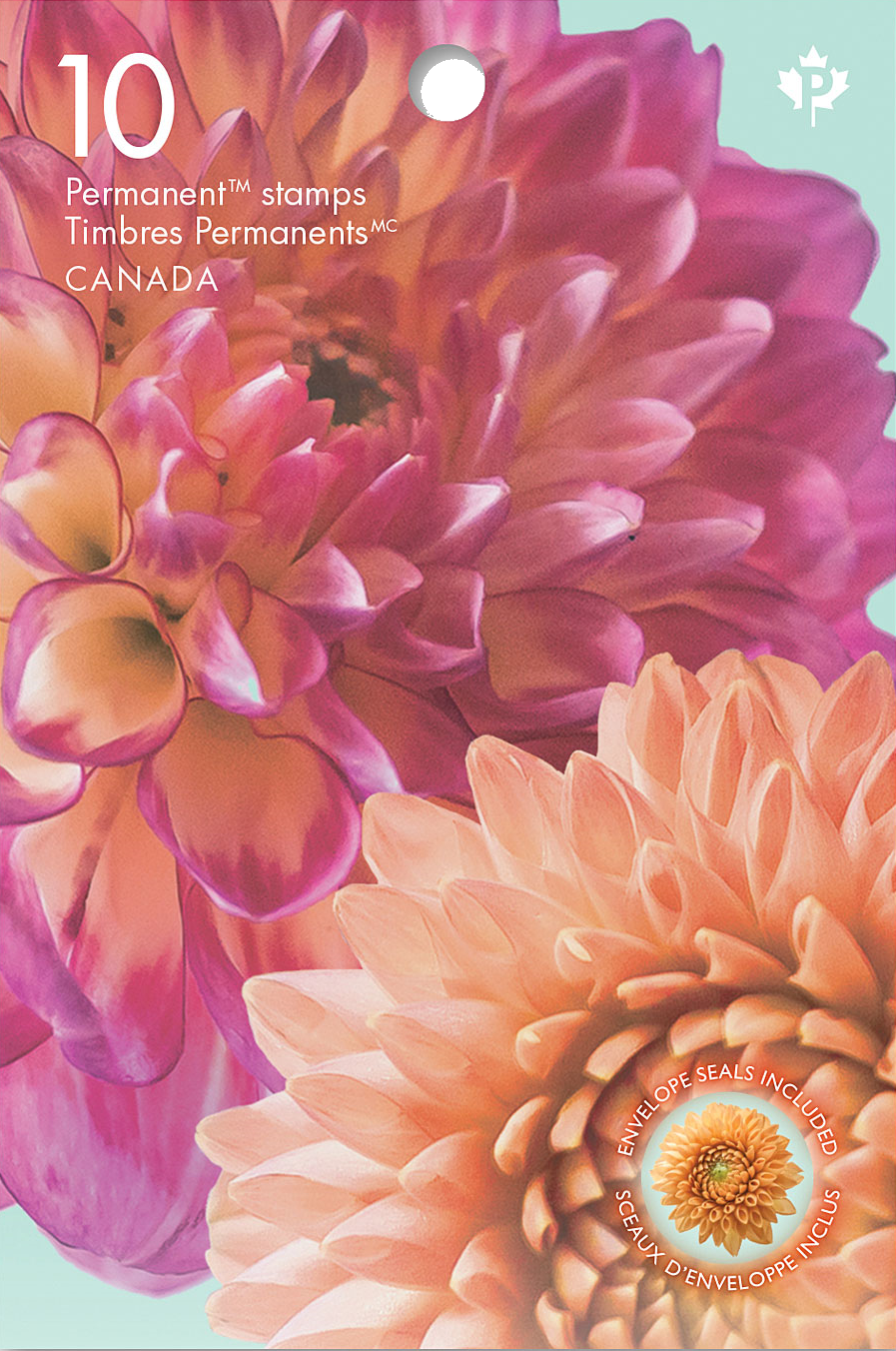 A favourite among Canadian gardeners, the dahlia is native to the mountainous regions of Mexico and Central America and is related to the sunflower, chrysanthemum and daisy.

Currently for pre-order only. Your item will ship once it becomes available on March 2, 2020.

Delight in the beauty of dahlias with this pretty souvenir sheet. This colourful collectible includes both PermanentTM domestic stamps from Canada Post’s annual flower issue.

A favourite among Canadian gardeners, the dahlia is native to the mountainous regions of Mexico and Central America and is related to the sunflower, chrysanthemum and daisy. 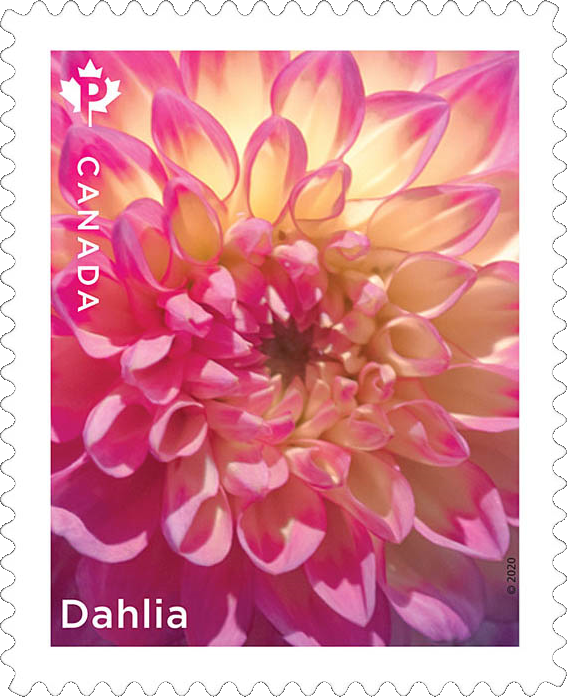 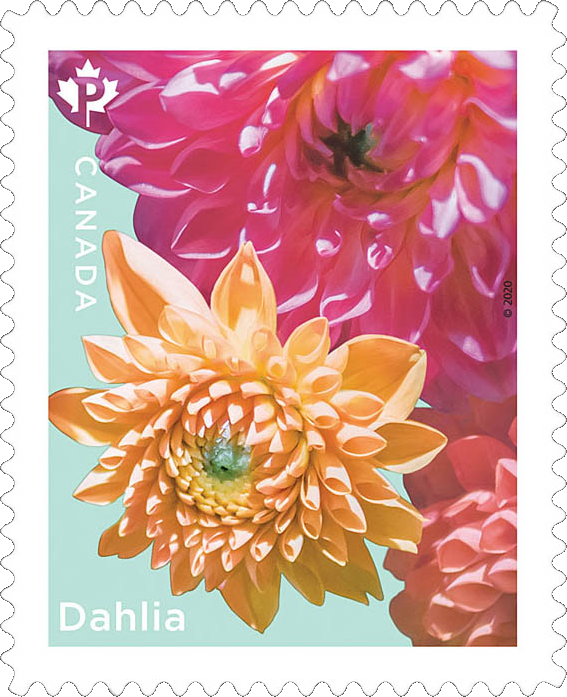 About Stamp Series
In what has become a much-anticipated postal tradition, Canada Post welcomes spring with its annual flower issue – this year, featuring brightly coloured dahlias – just in time for the wedding season and other bloom-worthy celebrations.

Dahlias can be found in almost every colour of the rainbow, except blue. Said to symbolize honesty, balance, inner strength, creativity, positive change and kindness, they have more recently come to be associated with diversity because of the seamless way their many petals form a single, dazzling blossom.

According to Carolyn Cutt, President of the Hamilton & District Chrysanthemum & Dahlia Society, “Canadian gardeners enjoy dahlias for their long-blooming, show-stopping appeal, and because they provide a nectar source for pollinators until winter.”

The fact that Victorian couples gave each other dahlias as a symbol of commitment may be a reason they’re still such a popular choice for wedding floral arrangements. 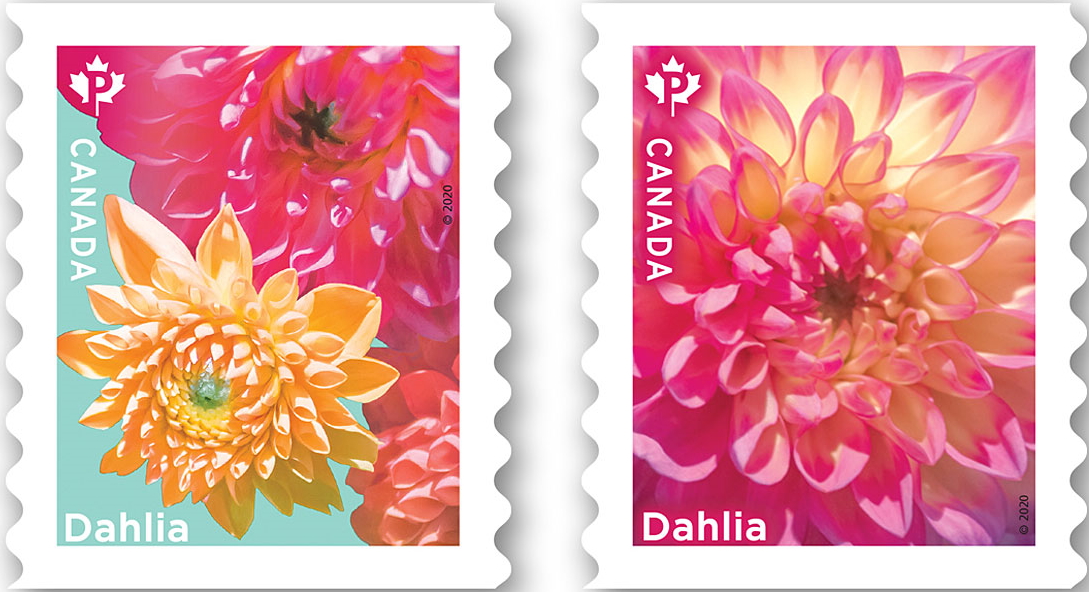 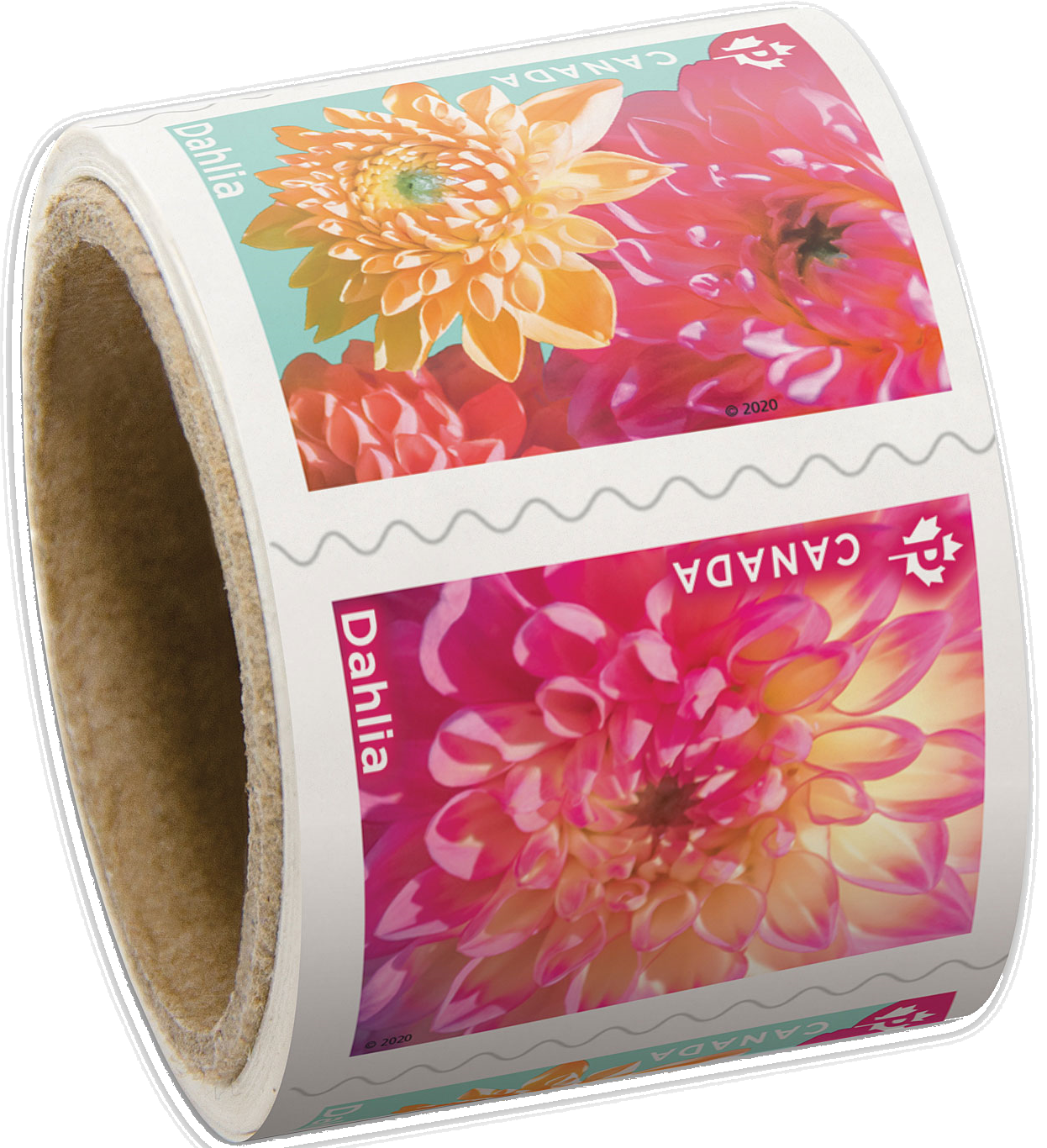 Add a fresh touch of spring to your mail with this coil of 50 PermanentTM domestic stamps featuring delightful dahlias. The two stamp designs on this coil feature two different views of the spikey, colourful blooms. These elegant stamps are perfect for invitations. 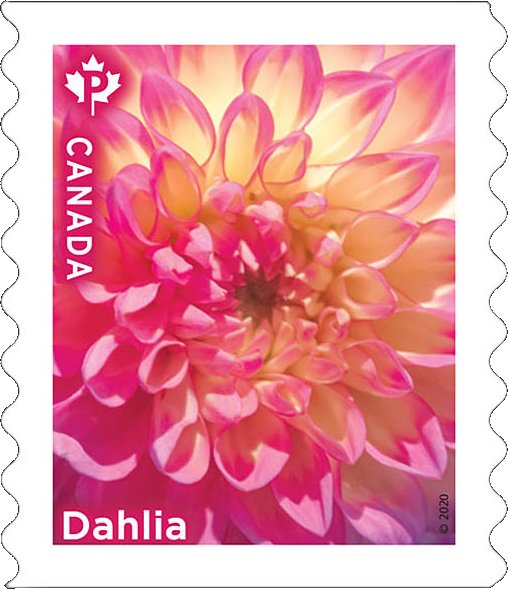 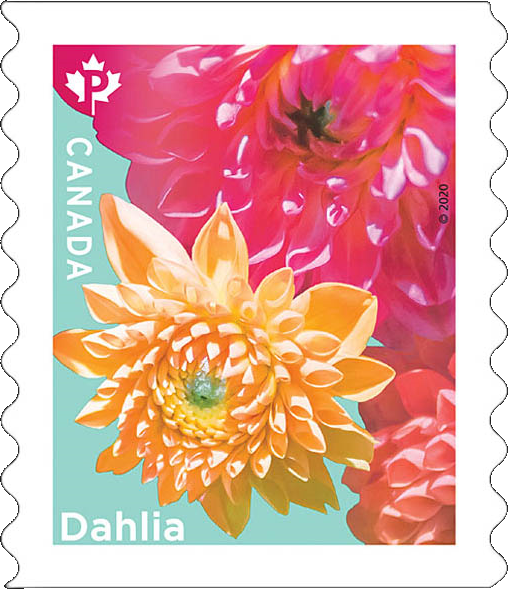 On March 2, Canada Post is issuing a se-tenant (side-by-side) pair of nondenominated permanent-rate (currently 92¢) Dahlia stamps in a booklet of 10, coil of 50 and souvenir sheet of two. The stamps in the souvenir sheet have traditional water-activated gum, and the others are self-adhesive.

Canada Post describes the stamp designs as depicting “dahlias in striking shades of fuchsia and orange.” One stamp shows a single dahlia bloom, and the other features three. Two dahlias are pictured in the selvage of the souvenir sheet.

Carolyn Cutt, president of the Hamilton and District Chrysanthemum and Dahlia Society, is quoted in the January-March issue of Canada Post’s Details magazine for collectors, “Canadian gardeners enjoy dahlias for their longblooming, show-stopping appeal, and because they provide a nectar source for pollinators until winter.”

Found in almost every color except blue, dahlias are members of the Asteraceae family.

Although grown in Canada and the United States, the dahlia is native to Mexico and Central America. In 1963, it was named as Mexico’s national flower.

The stamps also differ in size, with the booklet stamps measuring 26 millimeters by 32mm, and the coil stamps 20mm by 24mm. The souvenir sheet is 127mm by 73mm.

Canada Post serviced 7,000 first-day covers with a Bloomfield, Newfoundland, pictorial cancel showing a drawing of a dahlia bloom. Three dahlias are depicted on the cachet.

They also are available from many new-issue stamp dealers, and from Canada Post’s agent in the United States: Interpost, Box 400, Hewlett, NY 11557.