Long-time readers of this blog and Asian Meanderings may recall that, from time to time, I have dabbled with creating “fantasy stamps” for my own local post. The Muang Phuket Local Post had its first releases in October 2013 and had a total of 26 designs through early August 2015. The stamps were printed on sticker paper (imperforate!) and affixed to the lower left of any correspondence I sent. I mailed first day covers to myself from a postbox near my work and these usually took between ten and 14 days to travel the two miles or so to my home (I think most of them went via Bangkok, 525 miles away!).

Not only did I design and print stamps but I also had various rubber stamps made for the cancellations and other postal markings. It was a fun sideline to my “regular” stamp collecting activities. However, with only one completed and printed design in 2017 (MPLP #27, the first to be printed on gummed paper and perforated), the project died out, mostly over my own inability to master Adobe Photoshop. I spent countless hours trying to create a special release for my 50th birthday (in December 2015) but my attempts at a “classic engraved” design met with failure despite several tries at various times over the next year.

In early August of this year, several things combined to renew my interest in designing my own stamps and reviving the local post. I taught a teenager preparing for the IELTS exam and one of the reading tests included a text about micronations, specifically mentioning the Principality of Sealand in the North Sea. While discussing the article, I mentioned that I had some stamps from Sealand which I brought to the next lesson, along with some of my old Muang Phuket Local Post stamps. My student became quite fascinated with these and this led to her suggesting the new name of “Phuketia” (I’d previously taught her that the demonym for a person from Phuket was Phuketian).

Evolution of the Phuketian Flag

Not long after, I gave her an assignment to write an essay describing the new micronation of Phuketia. In preparation for this, she sketched out an idea for a flag, saying it should be red, white and blue as those were the colors for the flags of Thailand and the United States (home country of her teacher) but also have light blue to represent the Andaman Sea surrounding the island. I suggested that the clocktower which is the unofficial symbol of Phuket Town should be incorporated (it appears on the first MPLP release) but she said the “Two Heroines” of Phuket would be better.

Around this time, I stumbled across an excellent piece of photo-editing software called Paint.net which pretty much does everything that Photoshop can do but without the steep learning curve. If a task isn’t included in the program natively, there’s usually a plugin that will do the job. Searching the online forums yield plenty of easy-to-understand solutions to any problems one may encounter. I found it a joy to use and quickly designed an emblem and flag for what we were now calling “Republica Phuketia” and this inspired me to resume my stamp-designing endeavors. Certain design elements were edited using Paint.net (making transparent backgrounds and circular text, for example) but most of the actual stamps were created using another piece of software that I like called PhotoScape (v3.7) which has a lot more features than you might realize! 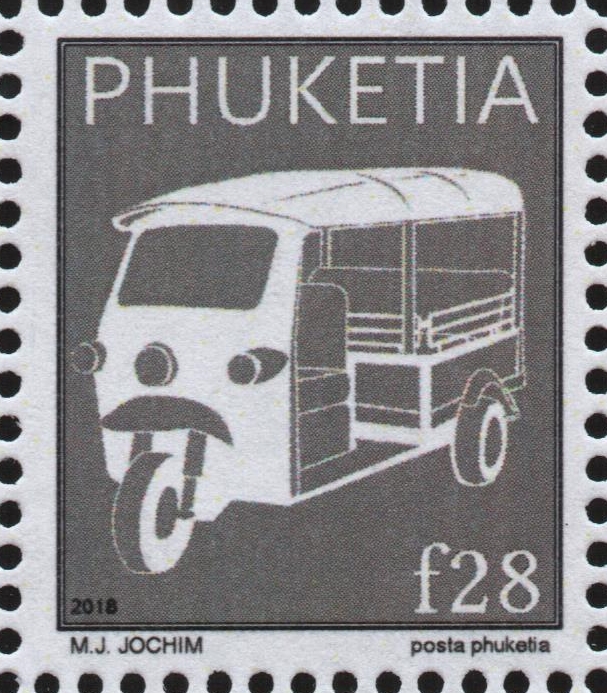 A few design ideas were sketched-out during the lessons with my IELTS student and brainstorm sessions became a regular part of the classes (she learned with me five days per week, two hours per day so we needed a break from some of the more difficult assignments and practice tests). She suggested that there should be stamps with elephants and tuk-tuks (a mechanized three-wheel taxi popular in Bangkok; the Phuket version is vastly different with four wheels). I had the idea of a stamp commemorating the bicentennial of Thai-U.S. friendship, something that Thailand Post seems to have ignored but McDonald’s here has not!

It was my student that decided on the pronunciation of “Phuketia”. The word Phuket itself is a Thai derivative of the Malay word bukit, meaning a hill, and is pronounced /bpoo-get/ with the “b” sounding more prominent than the “p” sound (with the diphthong Ph definitely NOT pronounced like an “f”!). The demonym “Phuketian” is pronounced /bpoo-get-tee-un/ (hard “t” sound) but my student suggested that, for our micronation, the “tia” combination should be a “ch” sound, thus /bpoo-get-chuh/. This, of course, takes much longer to describe than to say! She declared that the language should be a combination of American English and Thinglish (the pidgin English that most first-time Thai learners speaking in until they have had proper lessons) with some elements of Mexican Spanish and Latin thrown in for good measure. During one class period, we started making a list of Phuketian phrases with some hilarious results. We also established the currency as the eth, the name of a letter used in Old English, Middle English, Icelandic, Faroese (in which it is called edd), and Elfdalian, that is pronounced like the “th” in English “father”. The upper-case letter is  Ð while the lowercase form is ð, which I’ve used on the stamp designs as it looks a bit more exotic. The Phuketian eth is divided into 100 farang (which is a Thai word referring to any non-Asian white foreigner).

Remembering an episode of the Exploring Stamps YouTube series that mentioned Yourstamps as a printer who could perforate sheets of stamps, I checked out the very informative website and this sparked even more creativity. I found myself designing Phuketian stamps to fit most of the various formats that this company could make. I made small-sized definitives (slightly smaller than the final Muang Phuket issue) and commemorative-sized stamps in both horizonal and vertical orientation. By this time, I’d already contacted Yourstamps with a few questions (and to request a free sample packet) and found that they could make a continuous design across several stamps which led me to design a really cool souvenir sheet featuring a block of four. Upon reading that they could make triangular-shaped stamps made me decide that I needed my own! (These proved the most difficult to design until I realized that I could just design them as square stamps and then bisect the image.)

The final design of this first batch of stamps created is the first to be issued. The 2018 Phuket Vegetarian Festival stamps commemorate the nine–day event that got its local start in 1825. The vegetarian festival (เทศกาลกินเจ, thetsakan kin che in Thai) — the local version of a Taoist celebration usually called the Nine Emperor Gods Festival, held in many Chinese communities in Southeast Asia. The festivities are at their height here in Phuket, where about 35% of the population is Thai Chinese. It attracts massive crowds of spectators because of many of the unusual religious rituals that are performed. For a more extensive explanation of the festival itself, please see my recent article on A Stamp A Day. I have also written about it quite a few times over the years on my Asian Meandering blog with an October 2011 article describing the reason behind Phuket’s version of the festival,  an October 2013 article about the “grand finale”, and an article from October 2015 about the ceremony that signals the beginning of the event being the most “illuminating.”

I finalized my order early in September and patiently awaited the large parcel of sheets of stamps to arrive from the printer in Germany. I had hoped to have the Phuket Vegetarian Festival stamps (a set of eight) available during the festival which ran from October 7 until the 17th this year. A number of the Chinese temples and shrines have chop marks which can be rubber-stamped onto envelopes and other items (one year, a shopping center behind my home had a table with all of the rubber stamps available for use to one’s heart’s content). However, there were some delays in production and mail delivery (which can be sporadic in Phuket during the rainy season and the motorbike-using mailmen will not venture out from the post office if the weather is too wet and they suspend all service in my location during the Vegetarian Festival due to the processions clogging the roadways and the fireworks thrown at participants, spectators, and anybody else caught in the crossfire).

An provisional stamp issue was prepared in the interim using the 2017 Muang Phuket Local Post definitive and overprinting it with a Phuketia “Two Heroines” marking and change of value (the original was 25 satang which is equivalent to 10 farang in the new currency). I prepared a very limited number of MPLP last day/Phuketia first day of service covers this past Friday and Saturday, one of which is illustrated below.

The first day of issue for the 2018 Phuket Vegetarian Festival stamps for Republica Phuketia will be October 31, 2018 (Halloween being somewhat appropriate for this theme as both are frightening!). There are three horizontally-oriented stamps (#Ph29-31) printed in sheets of 15, perforated 13¼ x 13½, .and five vertically-oriented stamps (#Ph32-36) printed in sheets of 15, perforated 13½ x 13¼. They are denominated at 20 farang each. The stamps were designed by myself, Mark Joseph Jochim, using photographs taken by myself during the 2015 Phuket Vegetarian Festival and were printed by Yoursetamps using high-resolution laser printing technology. All are pictured below.

There will be a limited number of first day covers prepared for this release. However, they will receive the standard double-ringed Phuketia CDS with no additional pictorial postmark. Special rubber stamps may be prepared for future issues but that has yet to be determined.

A full release schedule for the remainder of 2018 will be announced in the upcoming week. A website for the micronation of Republica Phuketia (officially, the Non-Bureaucratic Autocracy of Republica Phuketia in English) is in the initial planning stages, based on my IELTS student’s essay and other work in our classroom project. She scored very well on the exam and has been accepted in a study program in the United States. I wish her well.

While these stamps are not for sale, I am always happy to trade for your other local post stamps, either mint or on cover. Simply contact me on this blog and we can set up a swap. 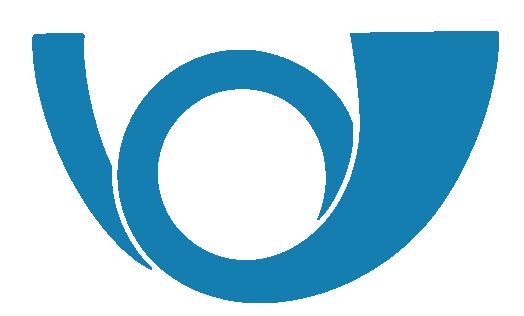